Every time we follow the money it leads us to one man… Mr Bill Gates!

William Henry Gates III a.k.a Bill Gates is an American billionaire who founded the Microsoft Corporation in 1975, which went on to become the world’s largest personal computer software company. Gates lead the company as chairman and CEO until the year 2000 where he resigned from his role as CEO. Bill kept his role as chairman and also became the chief software architect, but by June 2006 he announced that he would be transitioning to a part-time role at Microsoft and going full steam ahead with a new project…the Bill & Melinda Gates Foundation.

Gates formed the ‘William H. Gates Foundation’ in 1994 after studying the work of Andrew Carnegie and John D. Rockefeller. Rockefeller being the godfather of the pharmaceutical industry.

Rockefeller, who had made his money in oil decided to venture into the medical industry. When vitamin C was first artificially synthesized in Switzerland in 1935, Rockefeller saw the chance to control and monopolize multiple industries at once: petroleum, chemical and medical. How? He knew that vitamins and medication could be developed from petroleum and so he put his plan in motion.

But Rockefeller had a battle on his hands as natural and herb medicines were extremely popular in the US during the early 1900’s and almost 50% of medical colleges and doctors in the US were practicing holistic medicine, using knowledge that had been gained from Europe and Native American traditions.

Rockefeller knew he had to taint the reputation of his competition in order to get a hold of the medical industry so he used his vast fortune to purchase part of the German pharmaceutical company I.G.Farben and hired a contractor named Abraham Flexner to submit a report to the US Congress in 1910 which concluded that there were too many doctors and medical schools in the US and that all natural healing modalities which had existed for hundreds of years were “unscientific quackery”.

Money talks of course and congress changed laws relating to medical practice and ‘allopathic’ medicine (modern pharmaceuticals) became the standard of choice. Rockefeller then started funding medical schools all over the US on one strict condition – they were to only teach allopathic medicine.

And that is how one man managed to kick-start the ‘Big Pharma’ industry of the modern world in which the answer to everyone’s ailments and illnesses is chemicals and synthetic drugs.

So isn’t it interesting how Rockefeller’s work inspired another billionaire to start out on a similar venture?

Bill Gates combined the William H. Gates Foundation with two other family foundations to create the ‘Bill & Melinda Gates Foundation’ in the year 2000 in which Gates donated stock valued at $5 billion.

Which brings us to the present day. We are over a year into the alleged Covid-19 pandemic and one man has been ever present throughout in support of vaccines being the answer to the alleged problem.

But what concerns us the most is that whenever we follow the money in connection to some big mainstream players in the response to this alleged pandemic it leads us back to the same man… Bill Gates.

You may or may not have heard of Event 201? Event 201 was an exercise conducted on October 18th 2019 in New York. The exercise being the simulation of a high-level pandemic of a new and emerging coronavirus. It’s apparent aim was to illustrate areas where public/private partnerships would be necessary during the response to a severe pandemic in order to diminish large-scale economic and societal consequences. Event 201, a pandemic exercise to illustrate preparedness efforts
The Johns Hopkins Center for Health Security in partnership with the World Economic Forum and the Bill and Melinda Gates Foundation hosted Event 201.

Now the fact that a supposed new and emerging coronavirus dubbed SARS-CoV-2 allegedly spread around the globe just a few months after conducting a simulation of the exact same thing is a little too coincidental for our liking. We don’t believe in coincidences. Which is why we weren’t shocked to find that Event 201 was carried out by the John Hopkins Center for Health Security in partnership with the World Economic Forum and of course – the Bill and Melinda Gates Foundation.

Which brings us to one of the most intrumental players in guiding the response to the alleged Covid-19 pandemic – Professor Neil Ferguson.

Neil Ferguson is the man behind the infamous Imperial College model that warned Boris Johnson that, without an immediate lockdown, the coronavirus would cause 500,000 deaths and swamp the National Health Service. Ferguson’s model also influenced the U.S. to make lockdown moves with its shocking prediction of over two million Americans dead.

The result was a national policy in the UK that was modelled upon the actions of a communist tyranny in China – Lockdown.

Why did authorities ever listen to this man?

Ferguson was behind the disputed research that sparked the mass culling of eleven million sheep and cattle during the 2001 outbreak of foot-and-mouth disease. Ferguson predicted that 150,000 people could die, in reality there were fewer than 200 deaths.

One farmer’s neighbour recalled how she remembers “that appalling time. Sheep were left starving in fields near us. Then came the open air slaughter. The poor animals were panic stricken. It was one of the worst things I’ve witnessed. And all based on a model — if’s but’s and maybe’s.”

“It is becoming more obvious, even to those to whom it was not obvious at the time…that the slaughter that took place was grossly excessive.” (“Use and abuse of mathematical models: an illustration from the 2001 foot and mouth disease epidemic in the United Kingdom.”)

In 2002, Ferguson predicted that up to 50,000 people would likely die from exposure to BSE (mad cow disease). Ferguson said “Our latest analysis shows that the current risk from sheep could be greater than that from cattle, due to the more intensive controls in place to protect human health from exposure to infected cattle, as compared with sheep.” Read here.

In 2009, a government estimate, based on Ferguson’s advice, said a “reasonable worst-case scenario” was that the swine flu would lead to 65,000 British deaths. In the end, swine flu killed 457 people in the U.K.

Can you see the recurring theme here?

What’s more shocking is that Ferguson admitted the Imperial College model used to justify the past year of dictatorial tyranny in Great Britain was based on undocumented, 13-year-old computer code that had been intended for use in a feared influenza pandemic.

But the ‘lockdown or die’ argument which was adopted by governments around the world has remained official policy even after Ferguson’s model has been roundly attacked as not based on science, but on projected death rates which were much higher than the present estimated 99.8%-plus survival rate of the COVID-19 virus. Read here.

But who funds Professor Neil Ferguson’s work? Who has enabled this man to carry out the disastrous modelling that has resulted in the destruction of the UK economy and loss of everyone’s rights and freedoms? Bill Gates does.

Of course he does. Professor Neil Ferguson works for Imperial College London who have of course received grant after grant from the Bill and Melinda Gates Foundation.

The largest donor to the Imperial Network for Vaccine Research is the Bill & Melinda Gates Foundation.

Imperial College London - Network for Vaccine Research
The Vaccine Research Network benefits from the generous contributions of our sponsors and funding partners, which include:...

Who is the principal investigator of the Vaccine Impact Modelling Consortium within the Imperial Network for Vaccine Research? Well that would be Professor Neil Ferguson who declared as such within the Covid-19 SAGE Register of Participants Interests document found on the UK Government website. The document even states the Bill & Melinda Gates Foundation as donors. See pdf end of post.

Next we come to Professor Chris Whitty, the Chief Medical Officer for England. A man who has had enormous influence in shaping the UK Governments response to the alleged Covid-19 pandemic. The same man who was also the recipient of a $40- million grant in October 2012 whilst he was principle investigator for the ACT consortium.

$39,795,736.00 was donated by the Bill & Melinda Gates Foundation to support the ACT Consortium, which included almost 50 academic institutions in Africa, Asia, Europe and the USA.

Professor Christopher Whitty the Principal Investigator for the ACT Consortium at the time said:

“We are delighted. There have been great strides forward in developing new drugs. We now have to start to get them to the people who need them. The funding by the Gates Foundation to these studies on four continents, but concentrating on Africa, will help determine how best to achieve this”.

The next road we travelled down surprised us as it began at the BBC. In the 19-20 financial year the Bill & Melinda Gates Foundation donated a total of £1.569 million to the BBC and was one of their top 10 donors. Suddenly the BBC turning into the propaganda arm of the Government over the past year make sense. 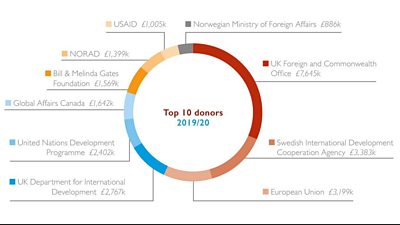 Where our money comes from
We are grateful to the wide range of funders, including national governments, the UN and other international organisations, foundations, corporate partners and private individuals that supported us in 2019/20.

Next in this web of corruption we’ve attempted to untangle we come to arguably the biggest player in the response to the alleged Covid-19 pandemic – the World Health Organisation.

The WHO is financed by member states of which accounts for around 37% of their funding when combined. But guess who the top donor to the WHO is? None other than Mr Bill Gates. Philanthropic Foundations account for 10.81% of the WHO’s funds, and the Bill & Melinda Gates Foundation accounts for a whopping 89.15% of that 10.81%. With over $610 million being donated to the WHO by Mr Gates within the past year alone.

One such example of a grant donated to the WHO by the Bill & Melinda Gates Foundation occurred in November 2018 in which Bill Gates donated $3 million to ‘improve capacity for research and innovation in epidemic preparedness, as well as support a Global Preparedness Monitoring Board to increase global accountability for preparedness efforts’.

Last but certainly not least we come to the University of Oxford who have developed a vaccine alongside Astrazeneca that has been approved for emergency use only in the UK. Their vaccine has resulted in over 200 recorded deaths within a month of its emergency approval and that number is increasing as well as thousands upon thousands of adverse reactions. Don’t believe us? See for yourself here. Read here.

In December 2018 they received a grant of $2 million from the Bill & Melinda Gates Foundation to ‘ pre-position clinical trial protocols and strengthen research preparedness for epidemic diseases’.

Is it just a coincidence that this one man and his money is at the end of each road we travel in relation to the major players in the response to the alleged Covid-19 pandemic or is there something much more sinister afoot here?

That’s for you to decide, but we will leave you with a quote from Mr Bill Gates himself of a statement he voiced in 2010.

“The world today has 6.8 billion people. That’s headed up to about nine billion. Now, if we do a really great job on new vaccines, health care, reproductive health services, we could lower that by, perhaps, 10 or 15 percent.”

Covid-19 SAGE.pdf
Use Scan QR Code to copy link and share it