Personal income rose again in August, but once again rising prices ate up all the gains and then some.

Economists and pundits talk about inflation as an academic exercise. They rarely reflect on the fact that rising prices have real impacts on real people.

Personal income from all sources rose by 0.2% from July to August. This includes wages, stimulus payments, transfer payments (unemployment, Social Security benefits, etc.) along with income from other sources such as interest, dividends, and rental income, according to the latest data from the Bureau of Economic Analysis.

So, while Americans saw more money in their wallets, they were able to buy less with those dollars. As WolfStreet put it, “It’s tough getting beaten up by the worst bout of inflation in 30 years.” 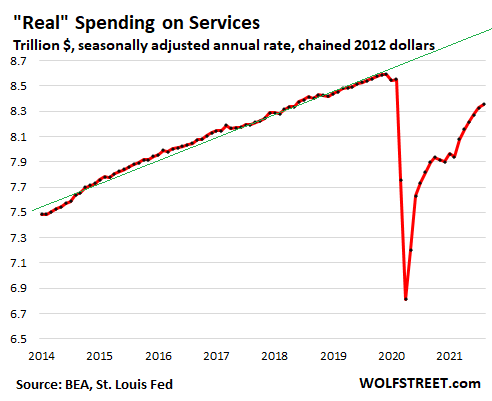 Incomes Got Chewed Up by Inflation. Americans Spent Heroically on Goods, But Not on Services. Eviction Moratoriums & Forbearance Implicated
Millions of people didn’t spend on two big services: rent & interest. How spending got skewed in bizarre ways.

This is the second month in a row real incomes have dropped.

Many pundits in the mainstream blow off inflation by pointing out that wages rise along with prices. But as this data shows, wages rarely rise at the same pace as prices. That means inflation puts a significant squeeze on the pocketbook, at least in the short term.

Consumers continue to spend as the economy emerges from the pandemic era, but half of the spending increase in August simply reflected rising prices. Overall, spending rose 0.8% month-on-month. But when you factor out inflation, spending was only up 0.4%.

The increase in spending partially reflects Americans returning to work and rising wages with the ongoing labor shortages. But as WolfStreet notes, “consumers are still flush with money from the myriad of pandemic-era fiscal and monetary stimulus, from forgivable PPP loans to stock market gains, and they’re still spending bravely.”

What will happen if the Fed tries to pull back on the monetary stimulus that continues to prop up this borrow and spend economy?

The spending shift from goods to services continued in August. Real spending on durable goods fell 1.3% month-on-month. It was the fifth monthly decline in a row after the stimulus-fueled spending binge on goods in March and April.

The shift in spending from goods to services could pose a problem for Jerome Powell and his “transitory” inflation narrative. If consumers continue to shift spending to services and it begins to approach prepandemic levels, this could provide the next source of inflationary pressure. Services carry more weight in inflation indices. As demand increase and pushes prices higher, it will impact inflation measure even more than the big spike in durable goods earlier this year.

Spending will likely be further skewed as moratoriums on evictions and loan forbearances run out. At the end of last month, 1.6 million mortgages were still in forbearance, along with $1.6 trillion in student loans. As these pandemic programs end, it will mean less money to spend on stuff.

This is a prime example of just how much all of the intervention into the economy by governments and central banks over the last 18 months have distorted the economy. It’s difficult to predict what will happen as these interventions unwind.