There was a comprehensive cardiovascular risk study released this week that involved a total of over 11 million patients and made some headlines.

The goal was to determine the cause of increased cardiac pathology. It was to be a very simple study comparing four groups:

It is hard to believe that the authors did not study these groups, but what came out of their comparison remains a mystery.

Instead, they compared the following groups:

When studies with huge data sets rely on modeling and do not share the data before adjusting for them, alarm bells should ring. That’s why you have to dig a little deeper. The study contained serious biases that need to be addressed, but let’s first look at the critical issue of myocarditis (heart inflammation). Because of the known risk of myocarditis from vaccination, it is worth looking particularly closely at the data presented on this. Curiously, the data on myocarditis were hidden in an additional appendix to the study. Why? It is unclear. Yet this is an important fact that should also be made public.

The risk of myocarditis seems to be an autoimmune disease (the immune system attacks the heart after an interaction with the spike protein) rather than direct damage from the virus/vaccine spike protein. Therefore, myocarditis could be caused by the virus or the vaccine. The critical question to answer is whether vaccination protects against the virus or increases the risk. The study authors report a myocarditis risk of 370 per million after covid infection in unvaccinated individuals.

The current control rate was 70 per million and the historical rate was 40 per million. What was wrong with the current controls? It was made clear that vaccinated persons in the Covid group were excluded from the calculation, but it was not stated that this was the case in the control group. Did vaccination lead to a 30% increase in myocarditis in the control group? Considering that the cohort appears to be old and we know that myocarditis incidence is higher in young people, an incidence of 1:30,000 is significant. 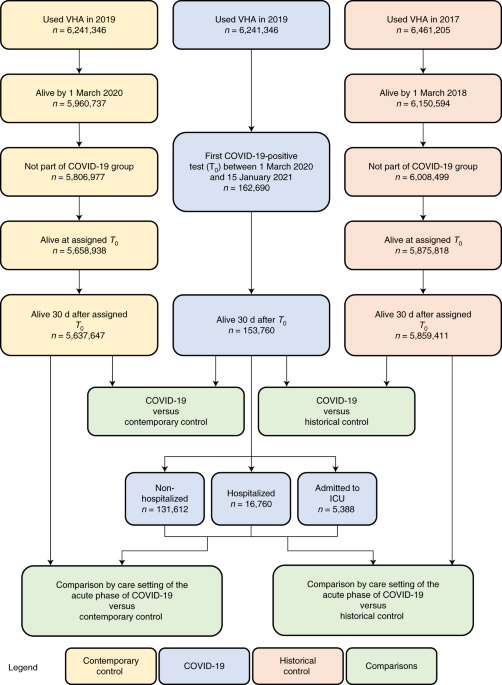 Long-term cardiovascular outcomes of COVID-19
Individuals with COVID-19 are at increased long-term risk for a wide range of cardiovascular disorders, even for individuals who were not hospitalized during the acute phase of the infection.

What about those who were Vaccinated and had Covid?

What about those who were vaccinated and had Covid? When vaccination (and modeling) is included, the rate rises to 500 per million-that is, 1 in 2,000. It is not entirely clear whether the supplemental Table 22 excludes those who were not vaccinated, but since it does not state that those who were not vaccinated were excluded from these data, it is reasonable to assume that the 500 per million refers to the entire population. Given the higher risk of myocarditis after vaccination, one might wonder whether this study shows protection against infection from vaccination, as this would reduce the risk from the virus. In the legends of the supplemental tables, the authors hide the fact that 62 percent of the covid patients had been vaccinated, compared with 56 percent of the uninfected control group (not a good advertisement for the effectiveness of vaccination against infection).

Assuming that 62 percent of the Covid cohort had been vaccinated and the unvaccinated had a rate of 370 per million, the vaccinated 62 percent must have had a rate of 580 per million to arrive at an overall rate of 500 per million (580×0.62 + 370×0.38 = 500). Therefore, the rate among those vaccinated with Covid and vaccination (even after modeling) was 210 per million higher (58 percent higher) than among those unvaccinated with Covid. (If the unvaccinated were excluded in Supplementary Table 22, the incidence of myocarditis after Covid would have been 35 percent higher among the vaccinated.) An additional risk of 210 per million means an additional risk from vaccination of one in 5,000 in a relatively elderly population. How high was it in younger men? This crucial question remained unanswered. The data included medical records of U.S. veterans who were 90 percent male, three-quarters white, and had an average age of 63. Two control groups were selected:

The Damage Caused by Covid is Very Large

There are two ways to deal with such bias. One is to compare the 150,000 Covid patients with similarly ill patients from the more than five million control groups. This reduces the size of the control group, but if it is already that large, this should not be a problem. Instead, the authors modeled the data until the groups appeared similar. Using an algorithm, they claimed that the total number of people in the Covid cohort was the same, but while 49,407 people actually had diabetes in the raw data, 11,903 (24 percent) no longer had diabetes according to the weighted data. Similarly, 14 percent were “cured” of lung disease, 14 percent of cancer, and a full 35 percent of dementia patients no longer had dementia.

The reasons for this unhealthy bias in the Covid patients were not discussed in the study. All positive test results were considered, and anyone can contract SARS-CoV-2, so factors that increase the risk of severe illness and hospitalization should not have biased a data set based only on infection. Instead, the authors discuss the hypothetical problem that people in the uninfected control group got Covid but were not tested, so the harm caused by Covid could be worse than reported in the study.

SAGE in the United Kingdom has reported that up to 40.5 percent of cases could be attributed to hospital transmission and that the majority of patients hospitalized in June 2020 were associated with hospital transmission. In Scotland, 60 percent of patients acutely ill with covid acquired the infection in the hospital in December 2020. Patients who enter the hospital are less likely to be healthy than the general population. In fact, we know that the Covid patients in the study were more likely to be hospitalized than the control group. If the bias is related to hospital-acquired infection, the entire study is called into question, since people who go to the hospital are more likely to be sick.

The authors selected some control conditions to show that they had not introduced bias. Because the study was about cardiovascular disease, including those that pose an immediate threat to life and those that are very common, I would have selected diseases that could lead to death within a year, such as lung, pancreatic, or esophageal cancer, as well as common diseases, such as urinary tract infections, diabetes, or prostate cancer.

The authors chose three rare malignancies, all of which have a one-year survival rate of more than 80 percent, and one preinvasive melanoma – why not invasive melanoma? Then they chose rare diseases and a strange selection: Hypertrichosis (“werewolf syndrome” with excessive facial hair), sickle cell anemia and perforated eardrums. If the selection is so incomplete, it begs the question of what the results would have been if more obvious criteria had been selected.

The group that tested positive for Covid fared poorly, with 13 percent ending up in the hospital (or starting there) and 4 percent in the intensive care unit. The average age was 63, which could explain some of the high percentage of sick Covid patients, but again, it suggests that this group may have been more vulnerable than the control group.

It is not surprising that people who have been treated in the ICU feel unwell for some time afterwards. The risk of ICU admission was higher with Covid than with influenza, but it is important to understand how much of the cardiovascular risk is due to the virus and how much is due to the ICU stay itself. How do these covid ICU patients compare to other ICU patients? The study doesn’t say.

Nor does it look at how many of the Covid patients tested positive only after they were admitted to the hospital. If, as in other studies, a significant proportion of patients acquired Covid in the hospital, then a higher risk for diagnosis of other diseases would be very likely.

This paper was published presenting the data in a way that should never have withstood peer review. The results were presented as if they showed the hazards of covid virus for cardiovascular complications without appropriate controls to allow this conclusion. The evidence for vaccination risk was hidden and not presented in a meaningful way for different age groups. Even then, they demonstrated a significant risk of myocarditis after vaccination, especially after first exposure to the virus, but this key finding was hidden in the Supplementary Appendix. And why?