On this occasion, two new images obtained by Dr. (Campra, P. 2021a; 2021b) in his report on “possible microbiotics in COVID vaccines” were identified as carbon nanotubes that have special features worth mentioning.

Figure 1 shows the microscopic images of the Pfizer vaccine and their comparison with images in the scientific literature (see below).

An initial definition of what is observed, before we move to detailed analysis, is that they are spheres or beads of liquid carbon and graphite crystals with a polyhedral or meniscus shape.

The image in the upper left of Figure 1 (Fig. 1.si, sample of the vaccine) can be described as a thread or fiber of slightly variable thickness, opaque, with apparently black dots of circular, ellipsoidal or oval shape, perfectly inserted and connected.

Noteworthy is the curvature of the thread, typical of graphene and carbon, which stands for flexibility and mechanical strength.

The discovery of carbon spheres or liquid graphene dates back to research by (De-Heer, W.A.; Poncharal, P.; Berger, C.; Gezo, J.; Song, Z.; Bettini, J.; Ugarte, D. 2005), in which they observed such formations using the electric arc discharge method in a helium atmosphere.

In the researchers’ words:

“Electron microscopy reveals a viscous, amorphous carbon layer covering the surfaces of the millimeter-sized, columnar nanotube structures that compose the cathode deposit. Within the nanotubes at the surface of these columns, regularly spaced spherical globules of submicrometer-sized amorphous carbon are often found. Apparently, liquid carbon droplets form at the anode, and rapid evaporative cooling gives them a carbon glass surface. The nanotubes crystallize inside the glass-coated and supercooled liquid carbon droplets. The carbon-glass layer eventually coats the nanotubes near the surface, causing them to bead.”

This means that the objects observed in the vaccine samples were produced by very specific techniques, aiming to produce MWCNT multiwall carbon nanotubes, which then lead to the aforementioned viscous carbon droplets.

According to (Song, L.; Holleitner, A.W.; Qian, H.; Hartschuh, A.; Döblinger, M.; Weig, E.M.; Kotthaus, J.P. 2008), the function of these viscous carbon beads is to enhance and improve the mechanical properties of the carbon nanotubes, which would allow for better adhesion and grip, as stated in the introduction of their work:

“The nearby beads could provide a gripping point to release the sliding between the host matrices and the filaments. Recently, carbon nanotubes coated with carbon glass spheres were observed in arc discharge products, and short carbon spheres with protruding cones were produced by a catalytic process.”

However, the applications of these objects are very broad and include “optoelectronics” as these “nanochains” can act as “nanowires” that can be used to form nanoscale integrated circuits with a higher degree of freedom in their patterning (Zhang, Y.; Li, R.; Zhou, X.; Cai, M.; Sun, X. 2008).

The upper right image in Figure 1 (Fig. 1.sd) can be described as a filament exhibiting strong fluorescence and flexibility, with some sort of crystallized, slightly hexagonal formations at its ends that may well resemble electrodes.

According to the work of (Nakayama, Y.; Zhang, M. 2001) and (Zhang, M.; Li, J. 2009), they are actually carbon filaments or carbon nanotubes with amorphous or polycrystalline graphite at their ends, resulting from the fabrication process, which makes them a neat superconductor (Simonelli, L.; Fratini, M.; Palmisano, V.; Bianconi, A. 2006).

Polycrystalline graphite terminations are typically 100-200 nm in size and do not distort the properties of carbon nanotubes, to which they impart other properties, namely, serving as electrodes.

These crystallized structures consist of multiple layers of graphene, about 15 or more, fused together by the heat of the electrical discharges required to produce the nanotubes.

When the method of making carbon nanotubes is an arc discharge at different currents and graphite is used in the electrodes, it is found that the carbon nanotube obtains the above-mentioned crystallized graphite structures at its ends (as they act as anodes and cathodes), as noted in the work of (Karmakar, p. 2020).

The interest in using arc discharge technology to produce these materials is simple, as the researcher explains:

“Arc-generated CNTs (carbon nanotubes) and LGs (graphene sheets) are mostly defect-free and therefore very useful in a number of technological and biomedical applications”,

Although this would be the subject of a separate article, it is worth noting that carbon nanotubes can be used to configure functional electronic circuits without the presence of electromagnetic fields or electromagnetic (EM) waves.

This means that “Teslaphoresis” is not necessarily required to configure circuits needed for various types of sensors, as a solution of graphene sheets, carbon nanotubes, and polymers or hydrogels allows the configuration of random and seemingly disordered pathways for electrical conduction. This is claimed by researchers (Yuan, C.; Tony, A.; Yin, R.; Wang, K.; Zhang, W. 2021) in their work on tactile sensors and carbon-polymer nanocomposite terms, see Figure 4.

On the other hand, Figure 4 also shows the mechanical properties of graphene and carbon nanotubes under heat-induced expansion and compression conditions, which makes them ideal materials for soft electronics applications in biomedicine.

All in all, the conditions to which the researchers (Yuan, C.; Tony, A.; Yin, R.; Wang, K.; Zhang, W. 2021) were exposed in their studies are very similar to those in the vaccine vials, leading to the assumption that the materials and objects already identified in the samples could act in this way in the bodies of the vaccinated individuals.

These issues are consistent with what has already been said about wireless nanocommunication networks for nanotechnology in the human body, which clearly point to hardware made of graphene quantum dots, biosensors, and other nanodevices for monitoring, data collection, and interaction with the body.

Another example of a circuit is the work of (Gupta, S.; Meek, R. 2020) on high efficiency thermoelectrochemical energy harvesting from hybrid carbon nanotube-graphene aerogels, see Figure 5.

In this case, an energy harvesting circuit is created that could serve as a battery for Internet of NanoThings (IoNT) nanodevices and, in particular, for in-body applications.

This means that the basic components of this energy storage device are already contained in the aqueous solutions of the vaccines, which also corresponds to the need to power certain nano-devices (nano-routers, nano-interfaces, nano-biosensors) in the wireless nano-communication network to transmit and send data packets with the lowest possible energy consumption.

The CORONA routing system for nanonetworks
Continuing research into nanocommunication networks, the hardware of which has been identified in blood samples from people...

One of the articles citing the work of (De-Heer, W.A.; Poncharal, P.; Berger, C.; Gezo, J.; Song, Z.; Bettini, J.; Ugarte, D. 2005) is highly relevant to the applications of carbon nanotubes in the field of neuroscience.

This is the publication of (Zwawi, M.; Attar, A.; Al-Hossainy, A.F.; Abdel-Aziz, M.H.; Zoromba, M.S. 2021), which links the use of the conductive polymer polypyrrole (PPy-polypyrrole) doped with multi-walled carbon nanotubes in optoelectronic devices for biomedical applications.

It should be noted that one of the forms of neuromodulation/neurostimulation known to science is optoelectronics and optogenetics, which has already been explained in the entry on brain stimulation by electromagnetic EM waves.

Reviewing the scientific literature on polypyrrole, graphene and carbon nanotubes, it was found that their combination is quite common, even when adding the search descriptor “neuronal” (more than 2000 scientific articles were found). 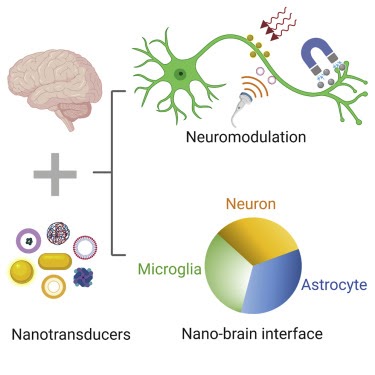 Without performing a more detailed search, reference was made to research by (Fabbro, A.; Cellot, G.; Prato, M.; Ballerini, L. 2011) entitled “Interconnecting neurons with carbon nanotubes: (re)engineering neuronal signalling”, in which carbon nanotubes, graphene nanosheets and polypyrrole are the necessary and indispensable materials for neuronal optoelectronics.

Thus, the article states that:

These properties make CNTs an attractive material for the development of nano-biohybrid systems that can control cell-specific behaviors in cultured neuronal networks.

The main goal of this brief review is to demonstrate how nanotube scaffolds can affect neuronal signaling capacity.

In particular, we will focus on the direct and specific interactions between this synthetic nanomaterial and biological cell membranes, as well as the ability of CNTs to enhance interfaces designed to record or stimulate neuronal activity…. Therefore, it is particularly important to better understand the effects of cross-linking neurons with CNTs on neuronal performance.”

The paper also confirms the ability of carbon nanotubes to interact with neuronal membranes, leading to electrical coupling and their integration into the neuronal structure.

This implies the possibility of neurostimulation with electromagnetic frequency potentials that interact with the synapse, regulating its plasticity and triggering the retransmission of stimuli and signals.

However, the researchers do not consider the problems of cytotoxicity and genotoxicity, which were already known in the scientific literature.

Electrical conductivity alters and excites neuronal tissue as carbon nanotubes act as neuroelectrodes, he notes in the following paragraph:

“The possibility of electrically stimulating neurons through CNT layers has been investigated, and CNTs have been shown to provide a suitable and efficient interface for direct stimulation of neuronal cells seeded on the nanotubes themselves. This is confirmed by the work of (Liopo, A.V.; Stewart, M.P.; Hudson, J.; Tour, J.M.; Pappas, T.C. 2006 | Mazzatenta, A.; Giugliano, M.; Campidelli, S.; Gambazzi, L.; Businaro, L.; Markram, H.; Ballerini, L. 2007 | Wang, K.; Fishman, H.A.; Dai, H.; Harris, J.S. 2006). More recently, as pointed out by (Fabbro, A.; Cellot, G.; Prato, M.; Ballerini, L. 2011), studies have been conducted combining collagens and polymers such as the aforementioned polypyrrole with single- and multi-walled carbon nanotubes that “act as nanostructured electrodes for the delivery of electrical stimuli at multiple sites or for the recording of neuronal electrical signals….”

Among the materials combined with carbon nanotubes, the review by (Fabbro, A.; Cellot, G.; Prato, M.; Ballerini, L. 2011) highlights PEG polyethylene glycol, PEI polyethyleneimine, TiN titanium nitride, PPy polypyrrole and Pt platinum, which are also used to create crystalline structures that act as electrodes at the ends of the carbon nanotubes.

In conclusion, the presence of carbon nanotubes in their multiple forms is highly likely to target neuromodulation and brain stimulation, which makes their presence in vaccine samples extremely concerning.