At the Munich Security Conference on Feb. 18, Bill Gates was asked to assess where we are at in beating the pandemic. He replied: “Sadly, the virus itself, particularly the variant called Omicron, is a type of vaccine. That is, it creates both B-cell and T-cell immunity.”

But why did Mr. Gates say “sadly”?

Maybe Mr. Gates read my Jan. 5 opinion piece, “Omicron May Help End the Pandemic This Winter”? I’m glad he agrees with me that Omicron is like an effective vaccine that is helping end the pandemic.

As a veteran vaccine scientist who spearheaded a vaccine project in 2003 against the original SARS, I was quite confident projecting where Omicron would lead the pandemic, given its characteristics after it emerged late last year. But knowing that the world’s most famous influencer looks at it the same way is quite satisfying.

I have to admit that I wrote my article with mixed emotions. On one hand, I was delighted because I knew that after two long years, Omicron could provide a way out of the pandemic. On the other, it was still relatively virulent and many people could die as it swept through the world.

Maybe Mr. Gates, whose foundation funded the development and distribution of COVID-19 vaccines around the world, was sad because of any deaths that occurred?

It doesn’t appear so, as he continued, “[Omicron] has done a better job getting out to the world population than we have with vaccines. … That means the chance of severe disease—which is mainly associated with being elderly and having obesity or diabetes—those risks are now dramatically reduced because of that infection exposure.”

Since reduced risk is good for humanity and something to be desired, what is there to be sad about? Was Gates sad because Omicron beat the vaccines in generating protective immunity, thereby preventing the ability of COVID to spread—meaning there would be no need for any future COVID vaccines?

If vaccines achieve sterilizing immunity, great. If not, and instead naturally occurring Omicron brings an end to the pandemic, equally great. It’s not a competition, it’s whatever gets the job done—that is, unless you value the success of vaccines more than ending the pandemic. 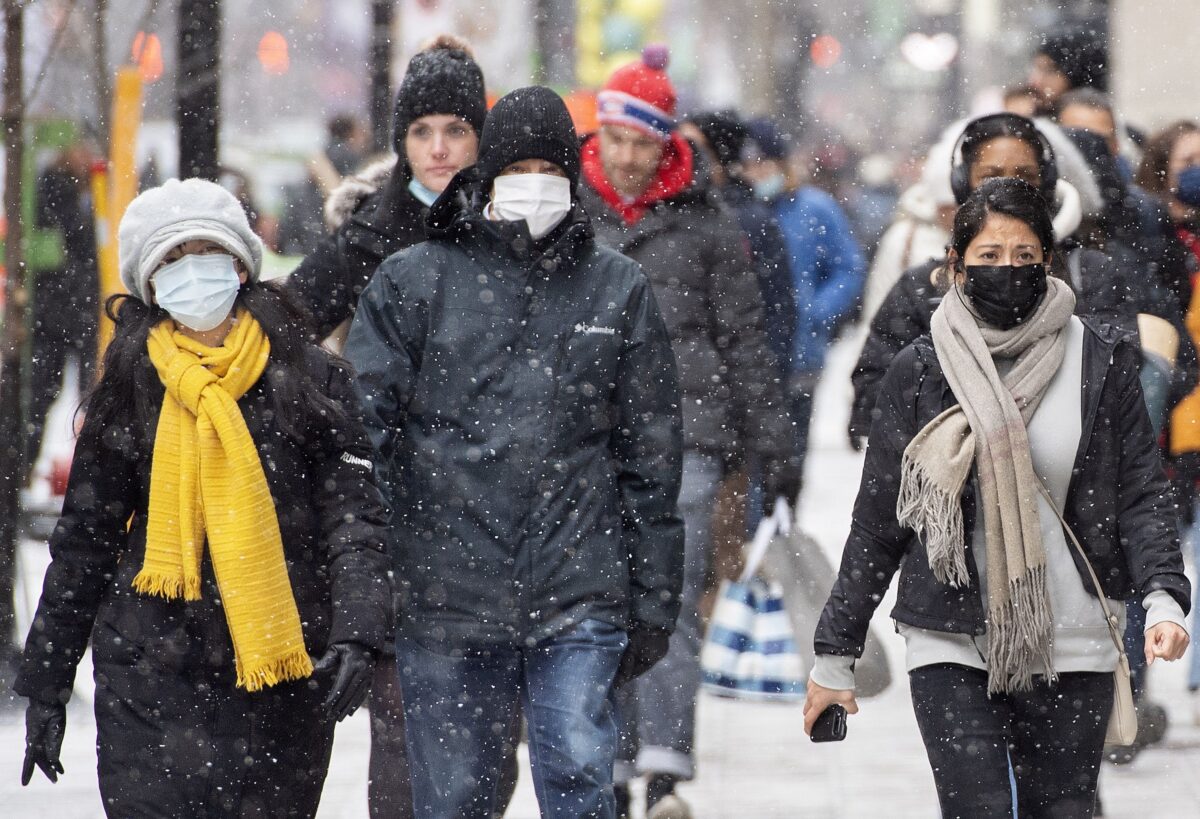 Omicron May Help End the Pandemic This Winter
Commentary In the 1960s, measles was devastating in many parts of the world, with the child mortality rate...

I shouldn’t be surprised, however, as I have been hearing the same song for the past two years.

Almost from the beginning of the pandemic, we were told that the only way out was via vaccination. Vaccines were rapidly developed and the emergency use of them was pushed out. There were vaccine drives and clinics, and before long boosters became part of the scenario. Then came vaccine mandates, even for people who had acquired natural immunity, followed by vaccination of children.

Meanwhile, the silencing of any negative information about vaccines, including vaccine safety, continued. Now Gates is looking ahead to the next pandemic and even faster vaccine development and rollout: “Next time, we should try and make it—instead of two years we should make it more like six months. It took us a lot a longer this time than it should have,” he said at the Munich conference.

All along it has been all about vaccines, and less about the disease. As a former vaccine scientist, I should be happy that vaccines have taken the center stage in the world. But I am not, as I am clear that vaccines are not the goal—they are merely the means to help humanity overcome the pandemic.

The means should never become the goal. When it turned out that vaccination failed to defeat COVID and it was instead conquered by Omicron, Mr. Gates found it sad. Humans missed a great opportunity to show that we are the true masters of the world.

Human history is a history of survival in harsh, natural conditions. Some in their efforts to survive discovered how to live in peace and harmony with nature, while others who fought and won regarded themselves as triumphant against nature. Mao Zedong famously said, “It is so rewarding (with endless joy) to fight against heaven, against earth, and against people.”

According to Mao and his comrades, when dealing with natural disasters, humans must win, and win decisively, through cleverness and persistence. It would not be a complete win if humans got help from nature, which would instead bring shame to all involved.

When I grew up in communist China I believed that, guided by Mao’s teachings, science and technological advancement could provide solutions for all the problems humanity could possibly face.

From a young age I idolized scientists, so I studied very hard and scored third in my province among some 100,000 high school graduates in China’s brutally competitive National College Entrance Examinations. I was then accepted in 1983 by the inaugural Department of Genetics and Genetic Engineering at Fudan University, freshly established by the geneticist Dr. C.C. Tan, a protegé of Nobel Prize laureate Thomas Morgan who discovered the role chromosomes play in heredity.

As a young man brainwashed by the doctrine of communism, I dreamt of engineering genes to solve all the world’s problems, such as diseases, food shortages, environmental disasters, etc. I thought that since nature caused so much trouble for humans, it was up to geneticists like myself to change nature by engineering the genes of all creatures to be exactly what we humans would like them to be.

Call it arrogance, naiveté, or stupidity, that was what I believed, as did millions of other young people in communist China at that time.

In November 2018, when Chinese scientist He Jiankui announced he had created the world’s first genetically edited babies Lulu and Nana, I realized that this crazy scientist could have been me if I’d stayed in China. Now Lulu and Nana are 5 years old and have their whole lives ahead of them. I can’t imagine how they will cope knowing that they were engineered.

Communism coupled with advanced technology has created types of human beings that have never existed on Earth before. Besides us regular humans who have existed for thousands of years, there are now people like He Jiankui, with his God-like powers to engineer human beings, and there are the engineered people like Lulu and Nana.

Chaos will be the new norm if things like genetic engineering or nuclear technology are not tightly regulated.

There was debate in the United States in 2014 about lab research that increases the virulence, ease of spread, or host range of dangerous pathogens—what is known as gain-of-function (GOF) research. The debate was triggered by the creation of a chimeric coronavirus, providing a bat coronavirus with an additional function of infecting humans (sounds familiar, but this is different from SARS-CoV-2 as we know it). Many scientists argued that GOF research was too risky. As a result, it was banned in the United States in October 2014.

However, such research continued in other countries, especially in China. If you can engineer babies, you can engineer viruses. Did GOF research have anything to do with the origin of SARS-CoV-2, which claimed 5 million lives worldwide? We do not yet have a definite answer. If it did, it might just have reached a new height of scientific achievement. I am sure Mr. Gates would be sad again if this were proven true, despite the scientific achievement.

Scientific research must be guided by the highest moral principles and with enough scrutiny to avoid human-wrought catastrophes, such as from nuclear technology or genetic engineering.

Man and Nature as One Body

Living in Canada, free of any governmental pressure, I was able to reflect on my personal world view and make changes based on my own conscience. It was actually after I came to Canada that I found my roots in traditional Chinese culture. The idea that man and nature are one harmonious body, as ancient Chinese believed, makes more sense than the fighting mentality the communist system taught me. I have learned to appreciate nature and accept whatever it has in store for me.

When outbreaks of infectious diseases occur, we should find ways to cope with them, as humans have done for thousands of years. Today, we have advanced technologies to better navigate the situation, as well as vaccines and therapeutics. But we should also try meditation and other holistic approaches to improve our immune system and seek harmony with our surroundings.

It seems that Mr. Gates and many others of his ilk have not yet found peace with nature. Using their money and power, they want to achieve a complete win in a war against nature.

My advice to Mr. Gates, for a better approach, is that humans work in tandem with nature and find harmony with nature. Do not pick fights with nature. We may win a fight here and there, but we will never win in a war against nature. Omicron has played a decisive part in assisting human efforts to end the pandemic, so be grateful, thank Mother Nature for the gift, and happily move on.