The scholars want to use psychology to promote vaccines, noting how customers make decisions in a process of thinking, feeling, and taking action. 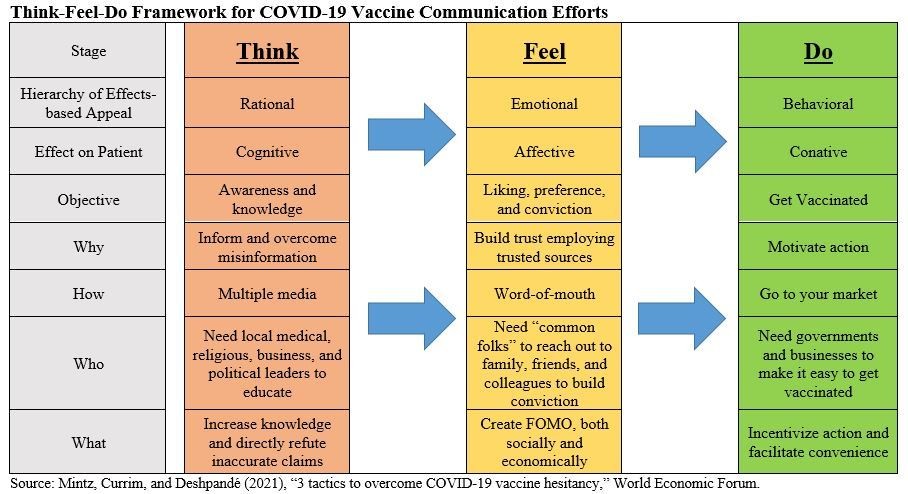 Solving the challenge of COVID-19 vaccine hesitancy
To achieve herd immunity to COVID-19, officials need to focus on thoughts and feelings rather than distribution. Information and incentives will be key.

The group had conducted research into how to combat what they described as a “demand problem” for COVID injections, with supply outweighing demand. This led them to suggest “creating and implementing such solutions to inform, persuade, and convince customer segments to act, and we believe this kind of approach could also boost COVID-19 vaccine communication efforts.”

The scholars want to use psychology to promote vaccines, noting how customers make decisions in a process of thinking, feeling, and taking action. The entire process is replicated when an individual has to decide to get a COVID-19 injection, declared the authors.

While emphasis has been on promoting the third part of this process — the “doing” or actual vaccination event itself — the group lamented the fact that much work was still needed in order to actually convince those described as “the vaccine procrastinator, hesitant, and rejector populations.”

In order to convince this sector of the population, “we need to focus on the ‘think’ and ‘feel’ stages of decision making,” declared the marketing experts.

As such, Deshpandé, Mintz, and Currim have drawn up three recommendations “to eradicate vaccine hesitancy.”

The three authors called for a campaign against vaccine “misinformation,” explaining how to address how people think about the vaccine. Noting that many who were hesitant about the injection believed it was “rushed, with underreported side-effects,” the group suggested a policy of directly confronting such people.

“This can be addressed by local leaders proactively reaching out and educating sceptics via media such as phone calls, direct mail, television, billboard, and digital channels.”

This alone was not deemed sufficient, however: “More assertive approaches” were called for in the battle against so-called “vaccine misinformation, in particular on social media.” In order to effect this, “training and funding” should be provided to help medical professionals or non-profit groups.

The war of feelings

Those who opposed the injection have strong feelings against it, stated the three authors, and as such “using information sources trusted by these people could improve their feelings about the vaccine.”

In this context, the WEF listed “medical providers, political and faith-based leaders,” but also highlighted the importance of “communities.”

The three authors suggested a form of emotional fear-mongering to be used against “vaccine sceptics.” “Another way to improve vaccine sceptics’ feelings is to play into a fear of missing out (FOMO), both socially and economically,” wrote the group.

Unceasing promotion of the vaccine

The final step relates to the practical availability of the vaccine, as the authors presented a range of suggestions to it to the population.

“Incentives can work,” they wrote. Business and states could launch a vaccine incentive scheme by “providing paid time-off, free products and lottery giveaways.”

Some of the WEF’s suggestions have already been implemented in a number of states. New York’s Gov. Andrew Cuomo (D) offered a free “vax and scratch” lottery ticket with a $5 million jackpot. Tickets usually cost $20.

Ohio Republican Gov. Mike DeWine offered residents in his state the chance to win $1 million dollars for presenting themselves for a COVID jab, while West Virginia residents under 35 will receive a $100 savings bond for getting vaccinated.

“We believe applying the ‘think — feel — do’ patient-centered approach to the COVID-19 vaccine communication problem will improve efforts at accelerating global herd immunity,” wrote Deshpandé, Mintz, and Currim. “Ensuring a safe economic reopening and recovery and overcoming this significant health and economic challenge could depend on such tactics.”

Despite focusing on promoting the vaccines, the marketing specialists did not consider the legitimate concerns which many have about the injections — including medical professionals.

Meanwhile the purpose and efficacy of the injections is being called into question, as over 4,100 people have now been hospitalized or died from COVID-19, despite being fully vaccinated, according to data released from the Centers for Disease Control and Prevention (CDC).