Biomedical tools manufactured with graphene and related materials will have to overcome a huge hurdle – our immune system. Now, G-IMMUNOMICS studied how to ‘disguise’ graphene to avoid rejection.

Graphene oxide is a carbon-based material with promising properties for applications in medicine, especially as a novel diagnostic and therapeutic tool. But before taking this step, scientists need to properly understand how it interacts with our immune cells, which protect our body from intruders.

Graphene Flagship researchers from Associate Member University of Sassari (Italy), and Partners at CNRS in Strasbourg (France), and University of Rome Tor Vergata (Italy) –among other European centres– have developed an experiment to characterize the complex interactions between graphene oxide and fifteen different cell types of our immune system, including T lymphocytes, leukocytes, monocytes, NK cells and dendritic cells.

The data of this study, published in Nature Communications, emphasise the importance of modifying graphene-based materials chemically, adding functional groups such as the nitrogen bearing amino group to make them more compatible with human immune cells.

“We have used [a technique called] single cell mass cytometry to analyse how graphene oxide affects these cells and if changes occur when it is ‘functionalised’, that is, when it conjugated to other molecules,” explains Lucia Gemma Delogu, one of the authors of the study.

Single cell mass cytometry allows scientists to detect several immune cell subpopulations and specific proteins of the cells, both on its surface and in its interior, with great precision. With this method, researchers have been able to measure more than thirty cell markers.

“We found that functionalising graphene with amino groups increases its biocompatibility as compared to ‘naked’ graphene oxide,” Delogu points out. “Moreover, we were able to identify specific stimuli of functionalised graphene in two cell types: monocytes and dendritic cells.”

A deep transcriptome analysis was also carried out to see how the genetic expression is modified in immune cells. The results confirm that amino groups reduce the disturbances caused by graphene oxide in the cellular metabolism, hence increasing its biocompatibility.

“A positive specific impact of graphene oxide on certain immune cells can be a great starting point for developing biomedical platforms based on this material, such as new immunotherapies, vaccine carriers and nano-adjuvants,” says Delogu. She also recalls that graphene-based materials may be easily conjugated with drugs and other molecules on their surface, “improving their function and the specificity on the target of interest.”

Researchers insist that discovering the most suitable ‘functionalisations’ of graphene will be essential for advancing in medical applications: diagnostic tools, tissue engineering, transfer of genetic material, as well as in the combined area of biomedical imaging and neuroscience.

This study is part of the G-IMMUNOMICS, a Partnering Project to the European Graphene Flagship initiative. Using immunogenomic and protein data, it has the objective of enabling a safer use of graphene in medicine and many other fields, minimising its effects on health and the environment. Currently, its impact is being analysed not only in human cells, but also in those of pigs, mice, and the C. elegans worm. 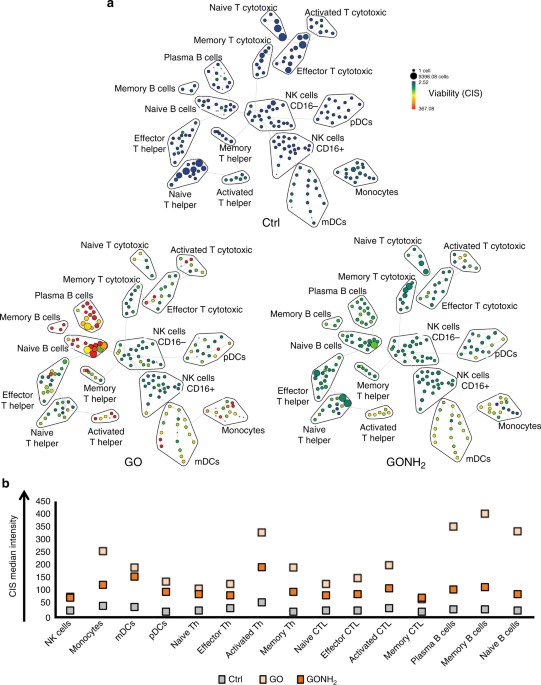