‘I’m confident that Pfizer’s actions comprise deliberate mass murder,’ stated Yeadon. ‘Their objective appears to be to keep people as fearful as possible and receptive to vaccination.

America’s Frontline Doctors Chief Science Officer Dr. Michael Yeadon has said there is “clear evidence of fraud” in the Pfizer study that purports to claim 95% efficacy in their COVID-19 “vaccine.”

Yeadon was commenting on an article appearing in The Lancet and critiquing a documentary that scrutinized a Pfizer efficacy study, calling the distinction raised therein between relative risk reduction and absolute risk reduction “accurate.” 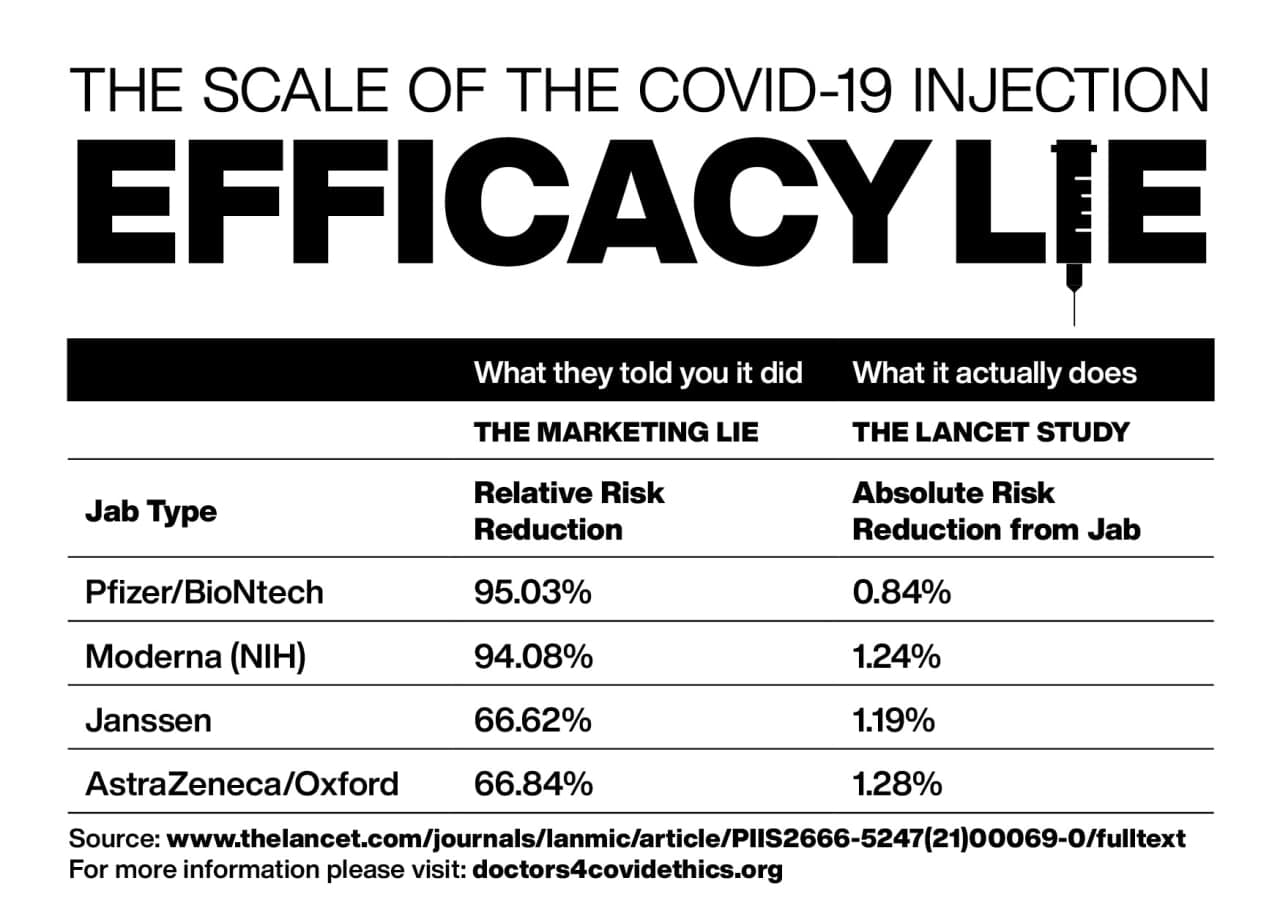 COVID-19 vaccine efficacy and effectiveness—the elephant (not) in the room
Approximately 96 COVID-19 vaccines are at various stages of clinical development...

“However, RRR should be seen against the background risk of being infected and becoming ill with COVID-19, which varies between populations and over time. Although the RRR considers only participants who could benefit from the vaccine, the absolute risk reduction (ARR), which is the difference between attack rates with and without a vaccine, considers the whole population. ARRs tend to be ignored because they give a much less impressive effect size than RRRs: 1·3% for the AstraZeneca–Oxford, 1·2% for the Moderna–NIH, 1·2% for the J&J, 0·93% for the Gamaleya, and 0·84% for the Pfizer–BioNTech vaccines.”

“Pfizer reported that its vaccine showed a 95% efficacy,” explained the documentary, entitled COVID Shot or Not? “That sounds like it protects you 95% of the time. But that’s not actually what that number means.”

“So the net benefit, the absolute risk reduction, that you are being offered in the Pfizer vaccine is 0.84%

“That 95% number? That refers to the relative difference between the 0.88% and 0.04%. That’s what they call ‘95% relative risk reduction’. And relative risk reduction is well-known to be a misleading number, which is why the FDA recommends using absolute risk reduction instead. Which begs the question: How many people would have chosen to take the COVID-19 vaccines, had they understood that they offered less than 1% benefit?”

“It’s worse, actually. In the Pfizer study from which the 95% claim comes, there’s clear evidence of fraud.”

“Why do I say that? Well, a study which is properly blinded means neither the subject, the study director, nor any other actor knows what each patient has received,” added Yeadon.

“Patients in clinical trials are obligated to follow ‘the protocol’, which specifies must-dos & prohibitions.

If it’s blind to the end, how could one group end up with five times as many subjects having their data pulled prior to statistical analysis in the test group compared with the control group?”

Governments, Media and Technology Titans have ridiculed the Experts

Yeadon expanded: “The story of how a large state within India solved its COVID-19 crisis is no surprise to those of us who’ve known since spring 2020 that our governments, media, and tech titans have been acting against our interests, both health as well as democratic.”

“We’ve known, for example, that highly qualified physicians and scientists are well able to treat and save most people infected by SARS-CoV-2. The methodology is simple: Attack the virus and the inflammatory and ultimately thrombotic disease phases rationally by administering targeted, multi drug treatments. These include Vitamin C and Vitamin D but in particular, Ivermectin, zinc and a zinc ionophore such as one of several old antibiotics like azithromycin.

Used in sequence depending on the presentation, in excess of 80% of patients avoid hospitalization and death, including in cohorts we regard as at high risk. Peter McCullough and colleagues have put themselves in harm’s way professionally in pressing home these simple messages.

Two remarkable meta-analyses (the highest level of medical evidence, a review of randomized, controlled clinical trials), authored by Tess Laurie and Pierre Kory, show conclusively that if you could choose only one medical treatment, it would be ivermectin. It’s safe, we’ll-tolerated, off patent and cheap to make, yet HIGHLY effective as a treatment for COVID-19. Reviews by Tess Lawrie and Pierre Kory are in the most read papers this year.”

“Yet not one major media channel has bothered to tell us this,” Yeadon continued. “Instead, they’ve lied about ‘horse deworming’ drugs and made false claims about safety.”

“This is what Uttar Pradesh used in a few short weeks to crush soaring COVID-19 deaths in this large Indian state. They didn’t do much vaccination. Vaccination has, separately, been shown by Steve Kirsch’s team, to have resulted in a median estimate of 150,000 deaths shortly after vaccination in the U.S.A. alone.

They made these calculations solely based on the publicly accessible database which collects adverse event reports, VAERS. Additionally, they used mechanistically plausible assessments of the most common, serious adverse events, finding for example that pulmonary embolism occurs at over 400 TIMES the rate observed after any other vaccine types since the database began operations a few decades ago.”

Yeadon added: “These novel technology gene-based agents cause our bodies to manufacture coronavirus spike proteins, and these alone are responsible for a substantial proportion of the adverse effects of being infected by the virus.”

“What have our governments, media, and technology titans been doing in the meantime?” he demanded.

“Rubbishing the experts, attacking the publications, suppressing information everywhere, and banning accounts that persist in telling the truth.”

“Having done this for well over a year, I’m confident that their actions comprise deliberate mass murder. Their objective appears to be to keep people as fearful as possible and receptive to vaccination. All of these claims are supported by plentiful public sources.

“But the scandal of depriving people of effective treatments while coercing them into submission to dangerous vaccination is the worst thing that’s happened in the world for decades, arguably forever.”

Dr. Yeadon concluded, urging people to “see the true scale of the lie before injecting their children.”